The 2011 Botswana stamp (Sc 1918) below features such a choropleth, showing population density by district.  For example, the lightest shade corresponds to 0.1 – 0.4 persons per square kilometer, up to the very darkest with 11 – 34 persons per square km. The choropleth successfully highlights the west-to-east gradient of increasing population density, a phenomenon harder to convey in a plain data table.  It even includes a source, the 2011 Census.  Bravo to Botswana for including so many components of a well-crafted statistical graphic (title, key, units, source) on such a tiny slip of paper! 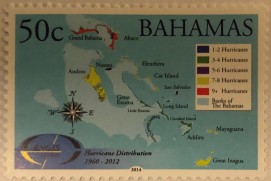 Hurricane frequency is shown on a 2014 stamp from the Bahamas (Sc 1413), above. The color key gives the frequency of hurricanes by area from 1960 to 2012, with categories from 1-2 to 9+ hurricanes.  Because of the small numbers, count data rather than rate data make sense here.  The colors, alas, are not arrayed from lightest to darkest (yellow to purple, perhaps?)  to correspond to increasing storm activity, though the worst experience (9+ hurricanes) is assigned the more alarming red.

On the occasion of the 25th World Leprosy Day, Cameroon issued a 1978 air mail stamp (Mi CM 882) whose choropleth gives the distribution of leprosy cases in the Southern Hemisphere. Unfortunately, there is no key.  Since typically colors deepen with greater numerical values, the eye is quickly drawn to countries with heavier leprosy burdens.

Choropleths are especially useful when the geographic boundaries are meaningful (eg, political units such as countries, states and counties) and when the raw data are statistically summarized to facilitate comparisons (eg, birth rates rather than number of births). However, when the geographic boundaries are not as meaningful, isopleth maps are a good alternative.  For example, weather or vegetation data may be better shaded along natural geographical lines rather than political lines.

In 2014, the United States (Sc 4893) depicted such a graphic, on a climate-themed airmail stamp showing global sea surface temperatures.

On the right, a Swedish stamp (1979, Sc 1302) shows the distribution of herring yields, in tons per square nautical mile.  Higher levels are indicated with increasingly dense patterns.  The use of patterns rather than a color gradient allows the stamp to be printed in black-and-white, but contributes to a sense of clutter on the small surface.

While not depicting numbers, maps sometimes feature categorical data that can be understood, statistically, to represent binary or multinomial variables.  The website of the American Society of Archivists gives the example of a map colored blue or red to indicate election results. Another example at the Barcelona Field Research Center website describes choropleths as including maps that show type of forest cover. These examples suggest that while less common, the term choropleth may be used for categorical as well as quantitative data.

For example, this 1976 Finnish stamp (Sc 585) color-codes dialects by region, a multinomial variable.  It was issued on the 100th anniversary of the Finnish Language Society.  The 1989 Colombian air mail stamp (Sc 1748) at right is a choropleth of a binary variable: coffee producing countries shaded in red and consumers in green.

The visual accessibility of choropleths allows them to present complex ideas to the viewer, with statistical information compactly and effectively conveyed.  I have some 30 distinct choropleths in my collection of statistical graphics on postage stamps.  Remarkably, even the constrained space on a postage stamp can be profitably exploited to educate the general public and to celebrate important aspects of a country’s geographic, economic and social life.

Click the link to see the handful of postage stamps that depict pie charts.  Plus…if you’ve forgotten how those graphs are constructed, there’s a short explanation, too!  Statistical graphics on postage stamps– what a great idea!

Please click on the link to read the article!

Please click on the link to read about population histograms (also called population pyramids) that have appeared on postage stamps around the world!  This article was first published in Philamath, Journal of the Mathematical Study Unit of the American Topical Association, Vol 36:2, Oct. 2014. Information on the Mathematical Study Unit may be found at www.mathstamps.org .